Free Bus around Senec town runs at regular intervals, it has “Mesto Senec” written across the side. Timetable is here: https://www.senec.sk/sk/clanok/mad The apartment is at stop 12=Železničná (Žel. stanica)=Train station. The bus station is stop 1. In the morning it will take you to the bus station in 9 minutes (1/3 of the walking time). It runs on time (sometimes a couple of minutes early !) 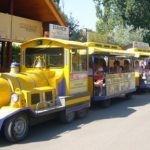 Road Train, in the summer season (July+August) a small road train goes around the lake/to the town, cost is €1 per trip, its a good way to see the lake if you dont like walking or its too hot, nearest stop is 100m from the apartment. 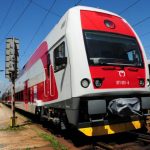 Trains to Bratislava run around every hour and take between 22-28 minutes depending on how often they stop. Single adult ticket is about  €1.50, its not any cheaper get a return ticket. You can download the IDS BK app to your phone and buy tickets direct on your phone (in English), its also cheaper. From the app you need a 6 Zone ticket which lasts for 90 minutes so you can use the tram/bus in the centre of Bratislava for up to 90 minutes from buying the ticket. You can check the train times at these sites:

Bus to Central Bratislava will take around 30 minutes. Buses leave either from the train station or the bus station (Senec Bus Station Location). Company is Slovak Lines

Taxi to Bratislava airport will take 20 minutes and cost around €25.

In the morning or evening weekday rush hours (7-10am and 4-6pm) allow an extra 30 minutes.

Bolt taxi’s are usually available in Senec (use the BOLT mobile app), they are usually the cheapest option for longer distances (outside of Senec).

To/From Vienna/Vienna Airport is easiest by Bus/Coach with a change at Bratislava Bus station (“Bratislava AS”). Total travel time from the apartment to Vienna airport is around 2 hours allowing for bus connections/traffic. There are multiple bus companies which can be booked online and support e-tickets (Flixbus, Eurolines).

Parking in Senec, there is plenty of free parking or paid parking if you want to walk less (50 cents for 1 hour) in the town (you can download the ParkDots app or pay via SMS (if you have a Slovak phone)). The paid areas are all to the north of the pedestrian street (near the Cinema/townhall) and also opposite Marathon resturant. Payment is only needed from 8am-6pm weekdays and only 8am-Noon on Saturday, Sunday is free.

Parking at all the supermarkets is free, and parking on the road near the train station is also free.

Parking inside the lake near the buffets – This is €3 per day (ticket machine) but if you leave your lake pass in the car window the parking is free.

The blue gate near the apartment is open 03:00 to 09:00 each day so if you get up early you can move your car to Lobsters car park (its free parking) and avoid driving round the lake later on.